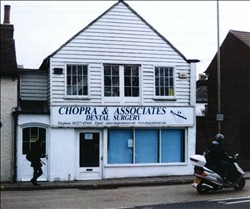 About Chopra & Associates
The premises are situated in a prominent position fronting one of the main routes around Canterbury City Centre on Military Road. The property is within easy walking distance of various municipal car parks and the City Centre itself, with its various retail and tourists amenities.

Canterbury surgery is situated on the Military Road going into the town centre itself.

It is on the main bus route for those travelling in from Thanet or Herne bay via Sturry with a convenient bus stop known as St Thomas Catholic School as the alighting point. Then just cross over the road and you can be in the premises in 2 minutes. Buses travelling from Whitstable or Faversham would terminate at the Bus station, with a walk of 10 minutes away from the town centre to the premises front door.

Canterbury has two train stations, West and East. Canterbury East is the easier access as it will be a straight walk down from the station to the Practice of about 15 minutes, whilst Canterbury West would take longer as the route would take the walker from St Dunstan’s through the main high street to reach the practice, although there are many taxi ranks available.

Canterbury surgery has 4 treatment rooms – two on ground floor level and 2 on 1st floor level, there is also a waiting area on each level and toilet facilities. Chopra & Associates are fully accessible for disabled and wheelchair users.