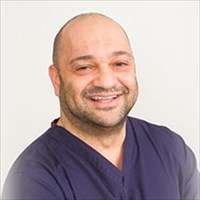 0%
from 0 reviews
Name
Mehdi Madani
GDC Number
66323 View GDC Page
Leave a review for this dentist
About Mehdi Madani
Mehdi joined Kendrick View in May 2012 and is origionally from London. It was here that he was educated at St Paul’s school and later graduated from Guy’s hospital in December 1990. After two years in a busy NHS/Private practice, Mehdi worked in hospital as a Senior House Officer in Orthodontics and Oral and Maxillofacial Surgery. He performed routine surgical procedures and assisted in major oncological surgery including free flaps and hip grafts. Mehdi then went on to complete his Master’s course in Conservative Dentistry (crown and bridgework) at the renowned Eastman Dental Institute in 1997. For the past eleven years, Mehdi has worked within a private practice in Knightsbridge and South Kensington. Here he has carried out advanced cosmetic procedures as well as routine general dentistry. During this period, Mehdi taught undergraduate students at Guy’s Hospital as a Clinical Demonstrator. He also worked as a Senior Dental Surgeon for companies including Marks and Spencer, Glaxo and Shell International. Mehdi has a particular interestin cosmetic, aesthetic and all forms of restorative dentistry.
Latest Reviews