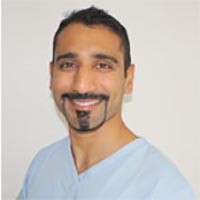 96%
from 3 reviews
Name
Baber Khan
GDC Number
85777 View GDC Page
Leave a review for this dentist
About Baber Khan
Baber qualified from Barts and the Royal London School of Medicine and Dentistry in 2005. He joined Crook Log Dental Practice in 2006 and became co-principal dentist in 2009. In 2007, he was awarded the Ruby Austin Shield for best case presentation at the end of his Foundation Year training. In 2008 he gained his MFGDP qualification from the Royal College of Surgeons of England and Certificate in Aesthetic Restorative Dentistry. He is a registered member of the British Academy of Cosmetic Dentistry and the Royal College of Surgeons of England. In 2012 Baber was accepted as a Foundation Year Trainer, a prestigious position where he is responsible for the in-house training of newly qualified dentists. In 2013 he completed his Diploma in Restorative Dentistry at the Royal College of Surgeons and was awarded the Gold Medal for best candidate. He will be commencing a Master of Science degree in Restorative Dentistry as part of his continual academic development. His main interests lie in Endodontics and Aesthetic dentistry. In his spare time Baber enjoys travelling, reading and meeting up with friends.
Latest Reviews